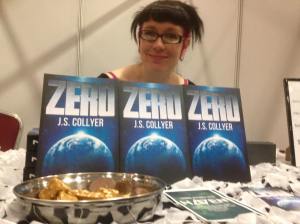 As I’m new to this gaming world I wasn’t sure what to expect. My primary reason for going was to see John & Genna (my partner’s brother and sister-in-law) who I haven’t seen since their move to the states several years ago. I was really looking forward to seeing them

Genna & me. Was lovely to see her again!

again and it was they who suggested I have a stall in the exhibitors’ room. And wow, was I glad they did!

I sold out of paperbacks in a matter of hours of this two-day con opening. It was staggering. I was overwhelmed! I even had people come and order more from me for when I get my next stock in.

(To everyone who ordered one: the publisher is placing an order for new paperbacks within the next couple of days so will be sending those out as promised within a fortnight!)

This was a con of people wanting to find new things as well as support independent artists and designers and broadcasters, people who love what they do so much they make it their life’s work.

My fellow exhibitioners were mostly indie game developers. It was really interesting finding out about their work and how they shop and show their games around the UK and European cons, as well as drawing comparisons between the lives of indie game designers and authors and artists. There were a lot to be drawn: at the end of the day, we’re all trying to get our art out there and doing it mostly using the sweat off our own backs and the money in our own pockets. It was wonderful to be surrounded by so many like-minded people pursuing their ambitions and dreams.

But it wasn’t just the attendees enthusiasm for the exhibits that was invigorating: this con was also wonderfully friendly, inclusive and fun.

Signing a book with people literally waving money at me! This is the dream

Even the panel discussions on current games, gaming issues and future projects, a lot of the content of which went over my head as a non-gamer, were wonderfully entertaining, even to someone who didn’t know all the context or in-jokes. This was a group of people who really knew their stuff, were passionate about their interests, and all the guest speakers were born entertainers.

I will definitely be back next year. With a mountain of paperbacks! 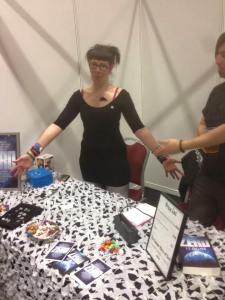 Sold out of paperbacks in a little over three hours

Thank you Jesse for organising a wonderful event, to all the volunteers for pulling it off and, of course, to John & Gen for their continuing support and help promoting my books, as well as, of course, their wonderful friendship. Here’s to next year!

For anyone who missed out on a copy

Zero, my debut novel with action, adventure, intrigue and SPACE PIRATES is available from Dagda Publishing through Amazon as both ebook & paperback!

The sequel, Haven, is out in October.

All being well, I will be back at CoxCon 2016 with both novels! I’ll see y’all there, right?

Thanks to the power of the internet and power couple that is John and Genna Bain, this picture of me and TotalBiscuit is currently making it’s way around the world on Twitter. I won’t be forgotten in a hurry I imagine!